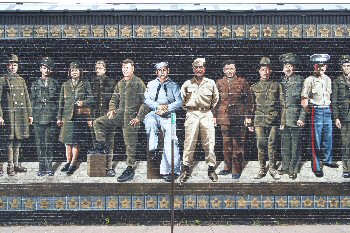 The Veterans Mural, located on the west side of the Bay Theatre Building across the avenue from the Vaughn Library, came into being after some citizens stopped on the street where the artists were working and suggested that they paint a mural celebrating the service of the Ashland area men and women in the Armed Forces.

So, Meredith and Martinsen advertised for photographs in the local newspapers. Thus, all the veterans painted in the mural are actual people from the area.

Photos were chosen for clarity and to achieve as much variety as possible among the various branches of the Armed Forces. According to the artists, the mural does not make a political statement. It is just a portrait of local veterans representing the service that they were in, and it is a tribute to them.

The artists say that this mural was a very emotional one for them. As they were working on the mural one day, they heard an engine revving behind them. They saw a long-haired grizzled motorcyclist, a very rough-looking guy; but he was crying. He said, “Thank you for what you are doing,” and drove off. People have traveled from all over the country to see this mural and to have their photographs taken in front of it. It is reported that Don Baird, who is in his 80s, drove his RV all the way from California to see his portrait. During the dedication of the mural in the summer of 2005, many of the veterans represented came to stand under their portrait with their families.

This mural took two years to finish and was completely funded by the community. Donors’ names were linked with stars that formed the mural’s border.

This mural is in honor of all the Ashland area military men and women who served our nation in various wars and conflicts. Their sacrifices will never be forgotten.

We proudly salute them all.