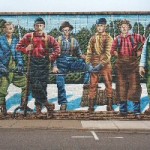 The Lumberjack Mural, located on 4th Avenue West just north of Main Street, depicts some of the men (and one woman) of Ashland’s lumber era, when the workday was from 4:00 a.m. until dark. An average day’s work for a pair of “sawyers” was 100 pine logs, and they each made $1.00 a day. In 1893, 10,000 lumberjacks worked in the logging camps that supplied Ashland’s 10 sawmills. Logs were transported by horse-drawn sleds on ice roads, by river where the logs were watched over by “jam crackers,” or by tug boats that hauled great “pulp rafts” across Lake Superior from the North Shore.

By the time the Lumberjack Mural was completed during the summer of 2000, the official mural walk board of directors had been formed. This mural was funded by the city and matched with donations from the public, whose names then appeared on the bricks outlining the mural. All the lumberjacks portrayed are actual people. They are listed below.

For this mural, artists Meredith and Martinsen sent out a call for old photos of lumberjacks who worked in this region. Out of about 44 submissions 22 were selected. Selections were made on the basis of the clarity of the picture, how well the picture was designed, and evidence of interesting logging implements in the picture.

Then the artists looked for an appropriate place for the mural. They wanted to keep the portraits close together, and they wanted a large blank wall near the highway to draw tourists in. The wall of the former J.C. Penney’s store seemed to fit the bill very well, so they asked for and got permission to use it.

As the project went along, many people came by to check the progress and were surprised to see how large the portraits were. Also there were a few complaints that there were not more women in the mural. But back in the logging era there were far more men in this region than women. It didn’t seem historically accurate to try to make the mural represent gender equity! As for the size of the figures on the wall, the artists had the idea to paint the loggers large because of the great impact that logging had on the area.

Across the avenue from the Penney’s wall is Northern State Bank. During the workday, tellers in the bank suddenly became aware of the huge figures across the street looking down at them, as though people from the past were now watching them in their daily lives.

The painters were happily surprised when the descendants of the people they were painting kept stopping by and asking when their ancestor’s portrait would be finished. Some families even began scheduling reunions around the time when their ancestor’s portrait would be completed. Thus, it was really gratifying for Meredith and Martinsen to see how much the murals meant to people.

If you take a walk from left to right, you will find the following Lumberjacks: