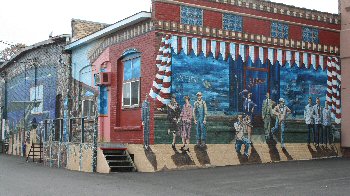 The next mural was the Aviation Mural located on the lake side of the 300 block, Main Street West. This mural, completed in the summer of 1999, celebrates Ashland’s early aviation history, its jazz past, and Schiller’s Shoe Store that was once housed in the building on which it was painted. The artists came up with the idea themselves and went to the owners of the building for permission to paint the mural there. Then they went to the business community for donations.

Conveniently enough, the arched shape of the back of the building looks like an old-fashioned airplane hangar. Those featured in this part of the mural are Joe Ante, Lieutenant Howard Bretting, H. Paul Culver, Edith Dodd Culver, Oscar Hagstrom, and John C. Chapple. The other parts of the mural highlight some of Ashland’s local jazz musicians around the year 1910 and the owners and employees of Schiller’s shoestore. We see there Emma Ellison, Demrise Gaudreau Hagstrom, George Carlson, Martin Lamoeaux, Alice Carlson, Ted Mesang, Fred Smith, Edwin Bloomquist, Hilding Branzell I, and Walter Goeltz.

This mural was paid for entirely by donations from Ashland businesses. For more information about the people represented in this mural, take a look at the Mural Walk Brochure.

Aviation contributors within the painting – from left to right:

John Ante – the first owner of an airplane in Ashland.

H. Paul Culver – a member of the “Early Birds of Aviation” and flew the first regularly scheduled airmail flights in 1918 in the United States.

Oscar Hagstrom – one of the early owners of an airplane and active in the first civil Air Patrol at the Ashland Airport.

John C. Chapple – spent over 50 years at the Ashland Daily Press and wrote many articles favoring the progression of avionics.

Schiller’s Shoe Store, and others – from left to right:

Ted Mesang – the director of the Ashland High School band and also a member of Northwoods Orchestra. The author of over 200 original band compositions.

Hilding Branzell I – the manager of Schiller’s Shoe Store.