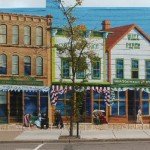 The Storefront Mural, located on 4th Avenue West just south of Main Street, was painted during the summers of 2002 and 2003. At the request of the building owner, Sue MacKenzie-Smith, the artists featured a variety of architecture found in the Ashland area. The artists did all the research themselves at the Ashland Historical Museum, where they found lots and lots of information. The buildings in the mural were not placed in the order in which they used to appear on the actual street. They were simply arranged by the artists in a pleasing array that would clearly represent Ashland’s past. Some of the buildings are still standing while others are not.

In the mural you will find, among others, the Royal Theatre, the Ashland Tobacco Company, the Chicago One Price Clothing Store, the E.J. Born and Company Jewelers, the City Drug Store, and Hayes Dry Goods. The focus of this mural was the buildings, not the people. However, to supply the figures of shoppers and other pedestrians on the street, the artists advertised for people to come dressed in historical attire to have their photo taken in front of the mural. The artists had the community members pose in various locations by the mural and then went through their photos and painted the various figures appropriately along the street in front of the buildings. Some people were used twice, and sometimes the artists took the liberty of changing the color or style of their clothing to fit the scene.

This mural was a two-year project. The storefronts were painted the first year,and the people were added the following year. The City of Ashland once again contributed monies toward this project, and, in addition, bricks with donors’ names inscribed were sold to help cover the cost.