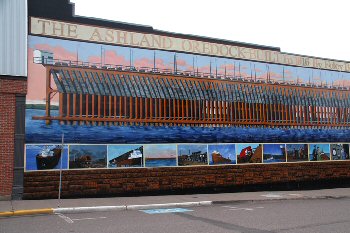 This mural depicts the Ashland Ore Dock, which was built in 1916. This monumental structure measured out at 1,800 feet. It was the largest concrete dock in the world. It is a beloved landmark to the city of Ashland residents, recalling a time past where shipping was an integral part of Ashland. The Ore Dock Mural depicts the iconic structure that defines much of Ashland’s very identity. This dock was used by the Soo Line Railroad to transport iron ore mined in upper Michigan to waiting ships in Ashland’s harbor. From there the ore was shipped south to the great steel mills of the Midwest.

The top portion of the mural is a “to scale” painting of the ore dock itself, including every properly numbered ore chute. The lower section includes 21 “postcards” telling the history of the varied uses of the structure over the years. The last “postcard” features the endangered Peregrine falcon, one of two that built nests in the ore dock in 2009. The ore dock was spared for a year because it was unlawful to disturb the birds’ nesting place. It was included in this mural because it was the last living creature to enjoy the use of the ore dock.

It has been said that many young men after having family conflicts faked their age and took up life on the ore docks and their boats. Many young men also used the money that they earned to further their education and then went on to other professional careers. A complete photo description of the 21 postcards can be found in the Self-Guided Mural Walk Tour book at the Ashland Historical Museum.