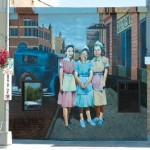 The owner of the building at 124 West Main decided to remodel. It occurred to him that, in the process, it would be a good idea to put a mural on the outside of the building. He wanted to honor Florence Dufek Larson who helped raise him and who had recently passed away. At her funeral, one of the artists saw a photo of Florence with two other women taken back in the 1940s when Florence was a waitress. The three women were standing on the corner in front of the very same building that was being remodeled. So, that photo became the basis for the mural. The waitress on the right is Florence Dufek’s sister-in-law, Delores Larson Vranes; the middle waitress is Priscilla Percy (Stelmaszewski) Muse; and, of course, then the woman on the left is Florence. At the dedication of this mural, the crowd was full of the portrayed women’s relatives.