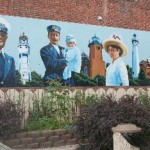 The Lighthouse Mural located on the corner of Chapple Avenue and Main Street was also done in the studio during the winter of 2000 on panels. The mural depicts three Apostle Island lighthouses and their “keepers.”

After seeing the mural, Lois Spangle, who lives in Ashland, called the artists and told them that one of the keepers in the mural was her father, Alphonse L. Gustafson. He was keeper at the Devils Island Lighthouse from April 1945 until his death on April 29, 1951. The other people in the mural are Emanual Luick and his family from Sand Island and A.G. Carpenter from Outer Island.

From Left to Right:

Alphonse L. Gustafson – the keeper at Devils Island Lighthouse from April 1945 until his death on April 29, 1951.

Emanual Luik Family. Emanual was the keeper of the Sand Island Light for 29 years.

Lighthouses, from left to right:

Devils Island – 1891. This light marks the spot where lakeboats running in and out of the ports of Duluth and Superior change course to line up with those ports on the cross-lake track. It stands 82 feet tall and has a range of more than 20 miles.

Sand Island – 1881. A twin to the Eagle Harbor Light, and the White River Lighthouse, this light was automated in 1921, deactivated in 1933 and reactivated in 1980. In 1885, light keeper Charles Lederlee spotted the wooden streamer PRUSSIA burning and making a dash for the island. Keeper Lederlee took to his rowboat and pulled through the stormy weather to the rescue of the boat’s crew.

Outer Island – 1874. Light keeper John Irvine heroically rescued crew members from the schooner-barge PRETORIA which wrecked near the light in 1905. Automated in 1961, the tower stands 90 feet tall and today shines a solar-powered light.