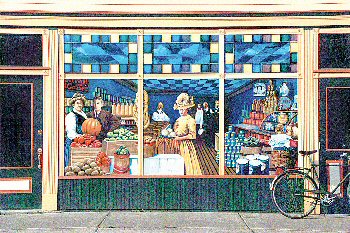 The corner of 9th Ave West and Main Street
Spring 2007

Next stop is Dhooge’s Store Mural located 9th Ave West and Main Street.  This mural was commissioned by the Chequamegon Food Co-op.  After they moved into their new location the mural was moved to its current location the artists came up with the idea of a shopping day around the end of the 19th century. In this era — just after the “cutover” — the settlers began to farm the land. They would come to town occasionally for supplies, a trip that often became a two-day event.

This mural was painted from actual photographs, and was the first one done in a studio on boards. The people’s faces were taken from yearbooks, the Ashland Historical Museum, and some photos sent up from Butternut. In the mural are Ella Reichenbach of Fifield, who occasionally came to Ashland to purchase produce, and William D. Leahy, an 1892 Ashland High School graduate who went on to become an Admiral in the U.S. Navy and Chief of Naval operations in the late 1930s. It is interesting that the admiral in the photo is dressed in a suit. Evidently we see him there as people in Ashland knew him, not as the famous admiral.