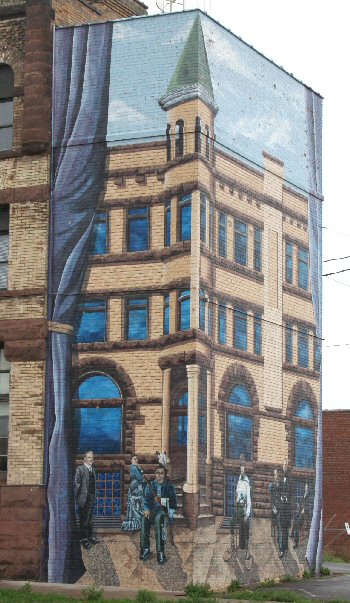 The Asaph Whittlesey Mural located at the corner of U.S. Highway 2 and State Highway 13 was completed in the summer of 1998. This was Ashland’s first mural, started with an idea by Mary Rehwald, Director of Lifelong Learning at Northland College. Rehwald and a group of community people got together and applied for a grant to the Wisconsin Sesquicentennial Commission. Their efforts were rewarded with a grant for $8060.00. Additional funds were received from the Ashland Foundation, the Chequamegon Area Arts, the Rotary Club and an anonymous donor.

The group sent out a call for artists. Sue Martinsen. Joan Haukaas from the Ashland Historical Society, Ruth Lull from Northland College, Sue MacKenzie-Smith from Designer’s Outlet, and Jane Smith were on the Design Committee. Two artists applied for painting the mural, and Kelly Meredith got the job. The grant required community volunteers and Sue Martinsen was one of the volunteers. At the end of this first project they were the only two artists left, and they have been painting city murals together ever since.

Kelly designed the first mural, following the committee’s request that it was to represent Ashland’s early founders. This mural depicts the Ashland National Bank as it appeared in 1892. The bank was located on the south or Main Street end of the building where the mural is painted.

There are seven figures in the mural that wraps around from the north wall of the building to the east wall. On the north wall, from left to right, are Asaph Whittlesey, founder of Ashland in 1854; Samuel Stuart Vaughn, who opened the first store and sawmill in Bayfield and worked to bring the railroad to northern Wisconsin; Edwin Ellis, who ran a drug store in Ashland and worked as a doctor here until 1872; and Sam Fifield, who with his brother founded the Weekly Press, managed the old Chequamegon Hotel, and ran a resort on Sand Island. Fifield also founded the Ashland National Bank and served as the Chairman of the Town Board, Representative to the State Assembly, State Senator, Lieutenant Governor of Wisconsin, and Postmaster of Ashland.

On the east wall, from left to right, you will find Dr. J.M. Dodd, who opened Dodd’s hospital, served as mayor, and was the president of the Northland College Board of Trustees. Then there is Emeline Patrick Vaughn, who built the Vaughn Library in her husband’s memory, and Chief Buffalo, Gitchi Bizhikee, known for the trip he made to Washington, D.C., at the age of 93 to petition President Millard Fillmore not to remove the Ojibwe from their land in Wisconsin. You will find more information about these Ashland pioneers in the Mural Walk Brochure.

While the first mural was being painted, there was construction on Hwy. 13 and the artists heard a lot of horns. At first, the artists thought the noise came from the work going on near them. But after awhile, they were gratified to see that the honks came from people giving the thumbs-up to them. Often people would even stop and take photos.

After completion of this mural, Gary Ellefson from Northern State Bank approached Meredith and Martinsen and asked them if they would do another one. This was the beginning of the idea that there should be a mural walk in Ashland. Having murals for people to look at would get people out of their cars when they drove into town.

So, the artists approached Ashland Mayor Lowell Miller and city administrator Tony Murphy with the idea of a mural walk and asked if they would support the idea not only philosophically, but also financially. The two men thought it was a great idea and suggested that Meredith and Martinsen form a tax-exempt organization to accept donations. The city committed up to $10,000 of city money if the community came up with matching funds. Thus, the idea of the Ashland Mural Walk got under way.