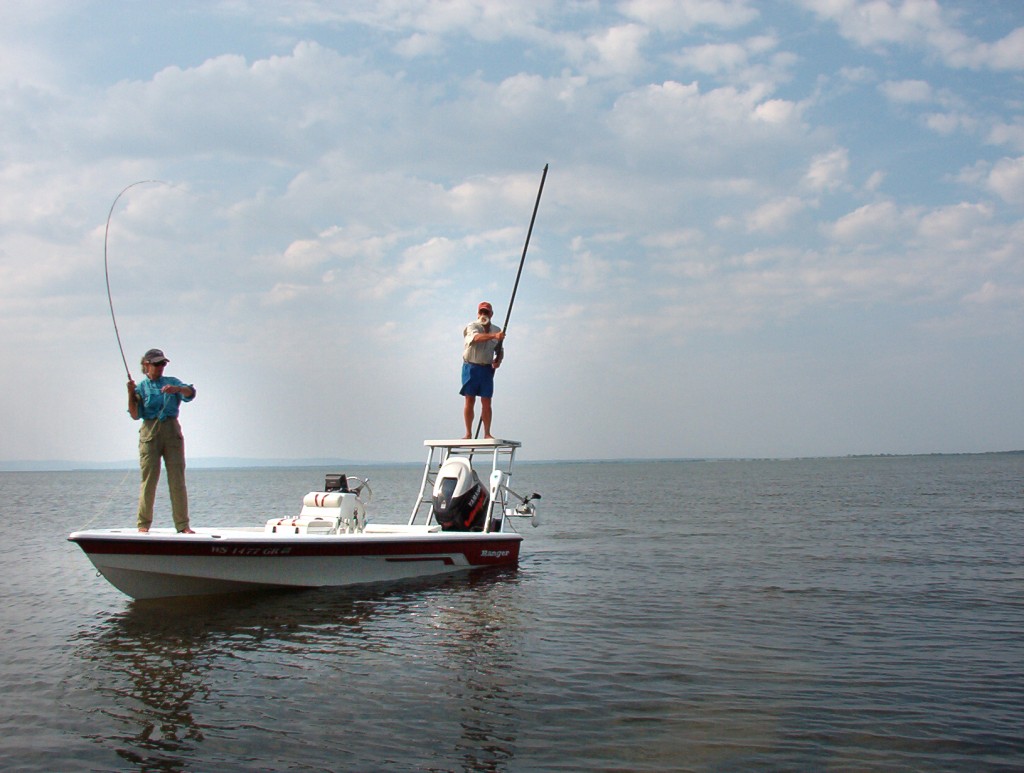 Veteran guide Roger LaPenter of Anglers All in Ashland fishes out on Lake Superior with his wife, Carolyn.

Captain Roger LaPenter, proprietor of Anglers All in Ashland, has been taking fishermen out on the bay for more than 30 years and has been guiding since he was 15.

“We have large, large smallmouth bass here,” LaPenter said.  “A 10- to 12-inch fish in most areas is considered big – ours average 18 inches!”

LaPenter explained that fishing regulations protecting the bass have allowed them to thrive in Chequamegon Bay, leading to its designation as a world-class smallmouth fishery.

“You’re only allowed to keep one fish per day,” he said, “and that has to be 22 inches or larger.  Otherwise, it has to be put back.  And because of that regulation we have a population of very large fish, so that’s what attracts people here.”

And smallmouth bass are not the only species of fish luring anglers to Chequamegon Bay.

“Our lake trout fishery remains excellent, the best around,” LaPenter enthused.  “In the spring, the trout and salmon are right here in the shallow waters.  As the water warms up, the trout move out.  In a normal year, you can still fish them from shore until the end of May, sometimes even June.”

LaPenter said Ashland’s near-shore or in-shore fishery is phenomenal. “That could be anywhere from the shoreline to 20 feet of water.  You’d be amazed at how many people do fish the shoreline; locals as well as tourists know you can get some beautiful early catches.

“When the smelt leave, you can catch beautiful northerns, browns and sturgeons right from shore.  There’s not many places in the world you can do that.”

LaPenter said he sees a definite silver lining to the harsh winter Ashland County has just emerged from, including the fact that the inland lakes were barely touched.  “Usually there are as many fish taken out of those in winter as there are in the summer,” he noted, adding it should all make for an even better summer season.

“Water levels should be up higher.  Fish should be able to go to their natural, normal areas, which makes them even more accessible.  Plus, they haven’t been fished all winter because of the weather.

“The pressure was really slow this season – that helps,” he explained.  “These fish are under a lot of pressure.  We have a good population of fishermen all year-round.  The fish normally don’t get a rest in between seasons.

“This year they were able to eat and feed and not be aggravated.  So we should have an exceptional spring and great summer.  I would expect to see more and bigger fish this year.”

A fishermen’s guide to avoiding trap nets and gill nets in the Great Lakes — and what to do if you get caught in a drifting net.

Check out the Chequamegon Bay FISHING Brochure. It has everything from fish species, places to fish, tying knots and much more. Stop by our office or order your brochure today! info@visitashland.com.

20+ GRRRREAT Things To Do