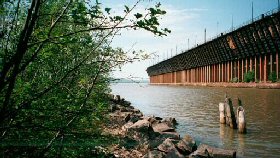 Construction of the Soo Line Ore Dock began in 1916. Originally, it was 900 feet long. In 1925, an addition was completed bringing the dock to its final length of 1,800 feet.

Before its demolition was finished in 2013, leaving behind just the concrete base, the ore dock was 80 feet high and 59 feet wide. It was reputed to have been the largest concrete structure of its kind in the world. Until the mid-1960s, iron ore mined in the Upper Peninsula of Michigan was shipped from this dock. At one time, there were five such docks in Ashland.

The remaining concrete base of the once massive structure is currently being developed as a public space and potential fishing pier.