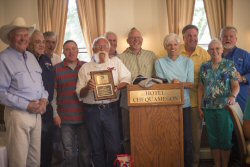 Captain Roger LaPenter, proprietor of Anglers All in Ashland, has been taking fishermen out on Chequamegon Bay for more than 30 years and has been guiding since he was 15.
“We have large, large smallmouth bass here,” LaPenter said. “A 10- to 12-inch fish in most areas is considered big – ours average 18 inches!”
LaPenter explained that fishing regulations protecting the bass have allowed them to thrive in Chequamegon Bay, leading to its designation as a world-class smallmouth fishery.
“You’re only allowed to keep one fish per day,” he said, “and that has to be 22 inches or larger. Otherwise, it has to be put back. And because of that regulation we have a population of very large fish, so that’s what attracts people here.”
LaPenter should know. When it comes to Wisconsin’s smallmouth fishing guidelines, he almost wrote the book – literally. Around 1985, while guiding on Chequamegon Bay, LaPenter recognized that the bay’s extensive popularity and resulting fishing pressure were putting the fishery, particularly smallmouth bass at risk. So he and other concerned anglers began to lobby for stricter regulations that would protect the bay’s great but declining bass fishery.
After years of dedication and hard work, LaPenter’s efforts paid off as new bass regulations were enacted by the state. Established in 1994, the new regulations included a creel limit of only one smallmouth bass per day measuring a minimum of 22 inches in length.
LaPenter’s work helped pave the way to ensure a sustainable fishery in northern Wisconsin by advocating for trophy catch-and-release regulation for smallmouth bass on Chequamegon Bay. The results and lasting impact speak for themselves as this fishery, 18 years in the making, now thrives with some of the largest smallmouth bass in North America.
Because of this important contribution to the sport, on Aug. 4, 2014, LaPenter was inducted into the National Fresh Water Fishing Hall of Fame at a ceremony and reception held at Ashland’s Hotel Chequamegon. Based in Hayward, the Fresh Water Fishing Hall of Fame is the international headquarters for education, recognition and promotion of fresh water sportfishing.
In terms of guiding, LaPenter began his career in the Rocky Mountains with one of the first rafting companies in the Aspen Valley. He spent years fishing all of Florida’s waters, which later prompted him to start a fishing camp in Mexico. His travels have led him to fishing destinations including Alaska and Central America, and perhaps most notably, 40 years of fishing the Bahamas.
After years of guiding in tropical waters, LaPenter fell in love with the rugged wilderness of northern Wisconsin and its excellent fishing. After convincing his newlywed wife, Carolyn, that Ashland was where they should grow old together, they moved in 1983. It didn’t take long for them to open a bait and tackle store, Anglers All, as well as starting a guiding service.
After spending only an hour talking to LaPenter, it’s obvious he loves the Chequamegon Bay area and his job.
“The best thing about guiding is yakking with the people,” he observed. “It’s a fun job and I get to do it in a beautiful place that offers something different every day.”
And despite his many years of experience fishing in many different spots around the globe, LaPenter remains as passionate about angling as he was in his youth.
“You could study fishing for a lifetime and still learn something new every day. That’s part of the beauty of the sport. When you stop learning, then it won’t be any fun.”

* Read more about Roger LaPenter, his career and his induction into the National Fresh Water Fishing Hall of Fame in Rick Olivo’s article in The Daily Press.